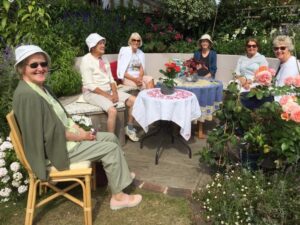 During the first lockdown in 2020 we set up a WhatsApp group and kept in touch through this and emails, sharing quizzes, jokes and newsletters. One of our members became tech proficient and set up Zoom meetings for us (thank you Diana!) We began Zooming fortnightly for social chat and general news sharing. Once the library allowed access we were able to resume reading our monthly books, meeting by Zoom once a month for book discussion, but keeping up the in-between Zooms for social reasons. During summer 2020 we managed some garden meetings in person. Further lockdowns meant no face to face discussion but we continued as before, with monthly newsletters updating the group on literary happenings eg prize winners, recent book reviews and other book related news.

Books we have read recently include: The Edible Woman by Margaret Atwood, Whistle in the Dark by Emma Healey, Love is Blind by William Boyd and Fell Murder by E C R Lorac.

Sadly, two of our members have died in the last few months: Daphne Somerfield, who on being registered blind, intrepid as ever, continued reading by audiobook well into her nineties; and Sue Humphrey, well-known to you all, admired for her boundless energy and commitment. Both contributed a huge amount to our group and we miss them very much.

As members of a reading group we have varied interests and tastes: how, therefore, to choose books that satisfy us all?

We like biographies, so read two over the past year, but though interesting books, neither of the subjects appealed to us. “Sheila” by Robert Wainwright, chronicled the life of a beautiful Aussie socialite who married into the British aristocracy and was rumoured to have had an affair with the future King George V!. (There was a Hayling connection – one of her lovers was the ex-husband of the Russian princess buried in St Peters’ churchyard). In “Spilling the Beans” well-born Clarissa Dickson Wright (one of the two fat ladies of TV cooking fame) told of her abusive childhood and descent into drunkenness. We thought her at times too boastful and economical with the truth and found some of her views abhorrent.

Choosing books by authors we have previously (separately) read and admired does not always guarantee a popular read. Robert Harris’ “The Fear Index” (topically about Artificial Intelligence) and Eric Newby’s “Departures and Arrivals” (snippets from his extensive travels about the world) were agreed not to be their best works.

Reading classics has been an aim of our group, and Daphne du Maurier’s “The House on the Strand”, deemed an example of a modern classic, was thought to be a very good read. Far more sombre, “The Awakening” by Kate Chopin, published in the USA in 1899, and described as the first feminist novel, was rated rather dull and tame. (The author’s beautifully crafted prose went unappreciated!) Taking as its subject the growing sexual feelings of a married woman for another man, it was thought scandalous in its day, ending its author’s novelistic career.

Comedy novels were surprisingly unpopular. Chosen as lighter summer reading “Mapp and Lucia” by E F Benson (between-the-wars social rivalry) and “Hitman Anders and the Meaning of it All” by Jonas Jonasson (a Swedish satire from the author of ”The 100 Year Old Man Who Climbed Out of the Window and Disappeared”) proved flops. Taste in comedy is very personal, and it may be best to steer clear in future!

So, does it matter that some books are not liked by some of the group? We feel that the challenge of trying books we would not otherwise have come across, thus widening our reading experience, is what a reading group is for.

This is an article published in the Summer 2018 newsletter ….

As often before, some of our best reads over the past year have been non-fiction:

‘The Shepherd’s Life’ by James Rebanks is an unsentimental account of the working year of a sheep farmer in the Lake District. Not for him a place of spectacular scenery or hearty walking holidays but the land where he and his forefathers have lived and worked in harmony with the seasons for generations. His lyrical descriptions of the changing seasons and his undoubted love for his animals bring into sharp focus the tough conditions of his working life. And yet, there is another side to his story: in his 20s, Rebanks, having idled away his schooldays, attended Oxford University, gaining a double first in history. His love for the shepherd’s way of life drew him back and today, to make ends meet, he combines this with a post for UNESCO advising on tourism.

‘Singled Out’ by Virginia Nicholson looks at the lives of “surplus” women who, after the terrible depredations of WW1, were left without hope of marrying or raising a family. For many this meant a lifetime of scrimping and getting by on near-starvation wages – mens’ needs always came before those of a single woman with no dependants. Others blossomed, taking on and making a success of roles that would never have been open to them had the men survived. Defying convention and prejudice, these women excelled in traditionally male roles of medicine, marine and electrical engineering, stockbroking, Egyptology and many more, paving the way for the generations who came after. One problem we encountered with this book was that the typeface is too small and faint: several of us had to use magnifiers.

‘Blood River’ by Tim Butcher recounts his 2004 journey along the Congo river, retracing the steps of his fellow Telegraph reporter Stanley who first mapped this region in the 1870s. He skilfully blends history with present day experience in this war-torn country, exposing the brutality and exploitation of colonial days and the cruelty, corruption, and venality of leaders and warring tribes following independence. He lays bare the shocking contrast between the “civilised” society of the colonial era and the broken-down remnants of it today. Butcher’s mother visited by rail in the 1950s; Katherine Hepburn stayed in a comfortable hotel while filming “The African Queen”. Yet today, in this resource-rich country, buildings are rubble, and no railways or roads remain. How did Butcher manage to make his journey against all the odds? How did he stand the relentless heat, the limited diet and the constant fear of marauding rebel fighters? A meticulously planned and executed trip.

We were, however, disappointed with Claire Tomalin’s biography of Jane Austen which we read to mark the 200th anniversary of the great author’s death. Little substantive Austen material remains (her family burnt most of her letters, for example). Tomalin was obliged to include a wealth of detail about friends and relatives of the Austens, which we found confusing and boring (too many Janes and Elizabeths!)

Other books we have enjoyed include Rosemary Lupton’s “The Quality of Silence” in which a mother sets out with her 10 year old profoundly deaf daughter along the Alaskan Dalton Highhway to search for her husband, refusing to accept that he has died in an accident. The pace and tension as the pair wrestle with the constant darkness and extreme cold of an Alaskan winter while pursued by villains, are well-drawn. ‘The Muse’, Jessie Burton’s second book following her successful debut novel ‘The Miniaturist’, is every bit as enthralling a tale. Set in two time periods, the late 60s and pre-civil-war Spain, it involves secret love affairs, hidden identities, and a mysterious painting which links the two eras.