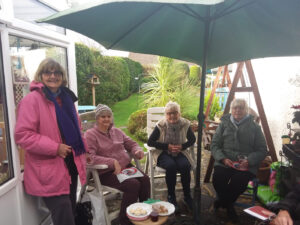 Mulled wine in the rain....not a book title, it was how we had our December meeting. We tried to plan the meetings for the following year.

The library are supplying monthly books to us :
'To kill a mocking Bird’ and 'The end of the Affair ' are planned so far.
We had to split the group in halves due to social distancing!

This year we have taken turns to be ‘in charge'.

In January Elissa gave a thorough and entertaining talk after our monthly read of 'A Study in Scarlet' by Sherlock Holmes. She also gave a resume of his life as well. This was an unusual and enjoyable novel, rather dated obviously, unusually constructed, most of the group were pleased to have read it.

In February, Gill reported on Sweet Caress by William Boyd. Again, it was an unusual novel, a kind of autobiographical love story. Enjoyed by all and we hope to find another novel by this prolific Irish author.

In March, we read a book of short stories compiled by Tracy Chevalier. Titled 'Reader I married him', each story had a link with Jane Eyre. What changes a woman's life depends on if or who she marries. Exceptionally interesting and entertaining.

As a group leader I can recommend this to other groups. A wide range of writers contributed and each member of our group spoke about the author as well as the story. Personally I think this would last longer than a single meeting...

Usually at our get togethers we choose a poem to read aloud with a given theme. Such as children, the sea, humour, holidays, travel... most of the group enjoy this but I do have to twist one or two arms!!! I consider myself very lucky to be in charge of such a varied and delightful group of friends where everyone contributes to running it.

This is an article published in the Spring 2020 edition of the Hayling Island U3A newsletter .

As members of a reading group we have varied interests and tastes: how, therefore, to choose books that satisfy us all?

We like biographies, so read two over the past year, but though interesting books, neither of the subjects appealed to us. “Sheila” by Robert Wainwright, chronicled the life of a beautiful Aussie socialite who married into the British aristocracy and was rumoured to have had an affair with the future King George V!. (There was a Hayling connection – one of her lovers was the ex-husband of the Russian princess buried in St Peters’ churchyard). In “Spilling the Beans” well-born Clarissa Dickson Wright (one of the two fat ladies of TV cooking fame) told of her abusive childhood and descent into drunkenness. We thought her at times too boastful and economical with the truth and found some of her views abhorrent.

Choosing books by authors we have previously (separately) read and admired does not always guarantee a popular read. Robert Harris’ “The Fear Index” (topically about Artificial Intelligence) and Eric Newby’s “Departures and Arrivals” (snippets from his extensive travels about the world) were agreed not to be their best works.

Reading classics has been an aim of our group, and Daphne du Maurier’s “The House on the Strand”, deemed an example of a modern classic, was thought to be a very good read. Far more sombre, “The Awakening” by Kate Chopin, published in the USA in 1899, and described as the first feminist novel, was rated rather dull and tame. (The author’s beautifully crafted prose went unappreciated!) Taking as its subject the growing sexual feelings of a married woman for another man, it was thought scandalous in its day, ending its author’s novelistic career.

Comedy novels were surprisingly unpopular. Chosen as lighter summer reading “Mapp and Lucia” by E F Benson (between-the-wars social rivalry) and “Hitman Anders and the Meaning of it All” by Jonas Jonasson (a Swedish satire from the author of ”The 100 Year Old Man Who Climbed Out of the Window and Disappeared”) proved flops. Taste in comedy is very personal, and it may be best to steer clear in future!

So, does it matter that some books are not liked by some of the group? We feel that the challenge of trying books we would not otherwise have come across, thus widening our reading experience, is what a reading group is for.

This is an article published in the Spring 2018 edition of the Hayling Island U3A newsletter....

The last three books we have read are as follows :

“Unless” by Carol Shields. Narrated by a 44 year old writer and translator whose college-aged daughter has dropped out of university and lives on the street with a cardboard sign round her neck saying “Goodness”. An intriguing novel, part mystery, provoked a great deal of discussion, but not enjoyed by all !

“Under a mackerel sky” an autobiography by Rick Stein the restauranteur. Born with a silver spoon in his mouth, I found him complacent and conceited. Rather a tedious book, being a list of all his achievements.

And this month’s book, “For one more day” by an American writer, Mitch Alborn. It’s about a son who lead a rather disappointing life (alcoholism, drugs, attempted suicide) who is able to spend a day with his mother who died 8 years earlier. The author writes well and it is a believable story.