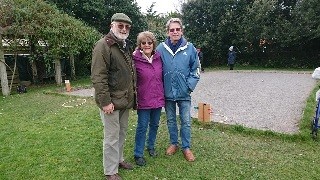 Sunday morning: Cold and windy with the threat of rain, Pétanque group 1 assembled at Seacourt. The lolly sticks were shuffled; teams were drawn, the piste freshly raked, the scene was set.

We won the toss, took the sunny side, and delivered the jack.
Despite scoring first, We were soon behind, most ends producing only one point. We were 5-7 down when they scored a massive 5 points, bringing Them to 12-5 up and only 1 point required for game! Our position seemed hopeless as They took control of the Jack and played for that one extra point and adjournment for coffee.

Not so fast!! As sure as a Harry Potter spell, the Curse of Twelve took effect. Could They get that extra point. No way! We proceeded to score two quick singles and a very lucky 4. Standing then at 11-12 down, the jack at 8m, favouring shooters, We were down to our last boule, They having played their last and We with one point ‘on the ground’.

Decision time! Should We take the point or play that last boule? Opinion was divided, with a risk of losing if it went wrong the last boule was delivered. Played dead weight it seemed at first to be too far to the right but by chance it clipped a short boule, changing course to the left, slowing dramatically and coming to rest by the jack! Two points and Game!

It is with regret that I have to report that We demonstrated a brief and unseemly celebration before retiring to Seacourt for their excellent coffee.

This article appeared in the Spring 2022 newsletter.