Social Bridge is a fairly quiet group. Actually it's quieter than that. We don't move around much either, except for a couple of times a year, when we de-camp to the Golf Club to rent the Sinah Room overlooking the lake, play and have lunch. The word "Frenetic" is not a good adjective for us, but we don't mind. 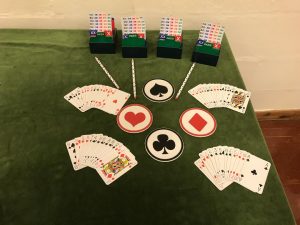 We regularly have enough members to fill 4 or 5 tables, and have space and kit for 6 tables as a maximum. So we have room for a few more members. If you would like to play Bridge, but don't know how, then we can direct you to classes that will get you started or improved (this is how many of us got started) - so don't give up hope!

We still miss Mrs. Vera Smith who led our group for many years, and trust she is enjoying her new home and U3A in Odiham.

This is an article published in the Spring 2020 edition of the Hayling Island U3A newsletter .

I have spent most of my life living outside of the UK – mostly in Australia. Upon returning to England a year ago I joined the U3A Tuesday morning bridge activity and am so pleased I did.

Vera Smith, who runs the bridge morning, has encouraged bridge players of differing levels of play to meet and help each other to learn from each other as they play. I found it to be a very welcoming, relaxed, informal atmosphere, and as a player of some 20 years I hope that I am able to contribute by giving some useful guidance to the beginners in the group.

In Australia the bridge players do not utilise the standard Acol method of play as much as here in the UK. They play as much “5 card majors” and “precision” as they do Acol. I partnered a lady who insisted on a “schenken” strong one club opener, I didn’t argue with her as she was from South Africa and was trained in the use of small firearms (she used to own a handgun in SA!!).

My wife and I feel very settled in Hayling Island, and it is due, not only to the friendly Island residents, but also to the welcoming nature of the U3A members. If anyone is thinking of learning/playing bridge, I would urge them to contact Vera regarding the Tuesday sessions.

Standards of play vary between Members, but everybody enjoys the morning, and the more experienced players will always advise, when requested.

We would welcome new members with some knowledge of the game of bridge.

Total cost of the morning is £2.00 per head. Please apply, through the U3A Website, where you can find more information.

We all take this opportunity to wish Hayling Island U3A members, a Happy Christmas, and a Healthy New Year

This is an article published in the Spring 2017 edition of the Hayling Island U3A newsletter...

The group sponsored a Bridge event on the 16th October to raise money for our local community (£860)! We would like to thank local businesses for sponsoring prizes for this event.

Two members of our group have moved to new homes and one member has moved to Bournemouth to be nearer to her family. I am pleased to say that she has already joined a local Bridge Group and is making new friends. We wish her all the best.

Our two instructors, Ruth and Russell continue to teach us the intricacies of bridge and provide much support in our bidding.

Our members are very keen and play bridge almost every week of the year. We welcome new members to our social bridge.

New members are most welcome – the group meets every Tuesday at 10:00am at the Community Centre.