Hayling rejoices in having several old “hostelries”, the oldest of which is claimed to be the “Ferry Boat”, formerly Norfolk Lodge, named for the Dukes of Norfolk who were once Lords of the Manor of South Hayling. It was the only one in existence in 1776 according to F.G.S. Thomas in his book “The King Holds Hayling”. Many of our other Inns were established to forestall the Licensing Law of 1889 which made obtaining a licence more difficult.

The original Norfolk Lodge is now a burnt-out ruin on the Ferry Road, opposite the Hayling Golf Course. In it and its outbuildings are timbers taken from HMS Impregnable which was wrecked within sight of it in 1798. It was always a haunt of watermen who plied their trade on the south-western corner of the Island. The Spraggs family who ran the Hayling Ferry were associated with this Inn for many years. Tradition has it that it was also intimately connected with smuggling, even though the Watch House was only a hundred yards away! The name was changed to “The Ferryboat” in the 1950’s, its close proximity to the Ferry coupled with the popular song of the time “Down at the Ferry Boat Inn” is the suggested reason for the change.

A “Maypole” Inn is said to have existed on the Island since the 18th century, though the predecessor of the present building (built in 1933) was built in 1803. Rural life revolved around the old “Maypole”. Once a year, members of the Maypole Benefit Club used to parade from their room at the Inn wearing their pagan regalia. Led by a brass band they would march to the Church for a special service following which they would return to the pub, bringing the parson with them who would then preside over a splendid dinner accompanied by “a cricket match, quoits, dancing, love-making and beer!”

The Barley Mow has been extensively altered over the years. It began life as two cottages. In White’s directory of 1878 it is listed as a beerhouse with a Mrs. Lucy Pannell as Landlandy. Lucy was still in charge when its famous Thrift Club was formed in 1875, its annual “share out” being one of the highlights of the Hayling Year. The original Barley Mow was in Station Road, now Jaspers. In the 1970’s it was moved to the corner of the same road in what had been a barn of Walters Farm. 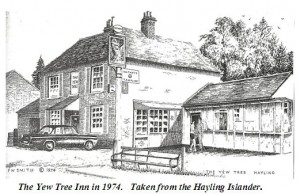 The Yew Tree, which stands on the border of North and South Hayling was once known as “Seamans” when it was a wheelwright’s shop. On this site the farmer brewed beer for his labourers and his family. It probably became an alehouse after the licensing laws were introduced. A macabre aspect of its history is that there was once a mortuary there where the bodies of drowned sailors were laid out after such disasters as the sinking of the Royal George off Spithead. It was bought by George and Douglas Henty the brewers, in 1877 from Ralph Cutler. It was modernised in 1956 when its indispensable car park was added.

Ralph Cutler also sold “The Rose in June” to George and Douglas Henty in 1873. Although the Henty’s demolished the old thatched beerhouse, replacing it with the present square building, they did leave the thatched barn which remained in a commendable state of preservation until it was so recently burned down. A beam in the barn bore the date “1739”. The name was probably taken from a large white rose bush which grew at the back of the original cottage.

The Olive Leaf owes its name to Hayling’s first lifeboat which was donated to the Service by the London company of Thomas Leaf & Sons in 1865. William Goldring, licensed victualler and first Coxwain of the lifeboat bought some 22 rods of land on the Seafront from J.S. Cutler and built the Inn. It is said that there was a race between the Lifeboat and Olive Leaf to see which Inn could complete its buildings and serve its first customer first. Tradition does not tell us which pub won the race.