Our group was very fortunate to have the opportunity to visit Whale Island and see the State Funeral Gun Carriage. 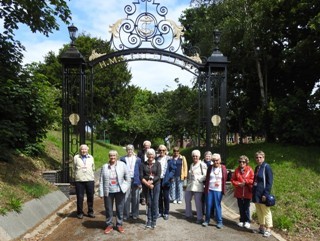 After security checks, we were given photo identity tags to wear and escorted around HMS Excellent, this being the oldest shore training establishment within the Royal Navy, and the location of the Naval Command Headquarters.

We had an excellent guide, Paul Barker who had a wealth of knowledge and presented an interesting and illuminating talk.

The Gun Carriage was very impressive and kept in pristine condition by Paul and his team. We learned about the history of the carriage which was first used for the State Funeral of Queen Victoria. This was pulled by a team of horses but there were delays because of inclement weather and the horses became tired and restless which resulted in some safety issues. The horses were unharnessed and Royal Naval ratings who were lining the route were seconded to take up ropes and pull the gun carriage. From this time, it has been the custom at all state funerals that Naval Ratings perform this duty. HMS Excellent seamen have had this honour at four State funerals.
At Ceremonial funerals the Gun Carriage is pulled by horses.

In the same building alongside the Gun Carriage there is a museum where there are photos of several state funerals showing the ratings pulling the carriage, it takes 150 seamen, quite a spectacular sight. 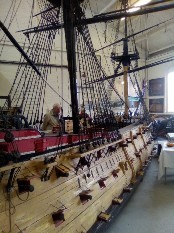 Also, here was a replica of the old warship HMS Charlotte, the original Naval Gunnery School, whose name was later changed to HMS Excellent. Built at Whale Island to perpetuate the memory of the original Naval Gunnery School. This is an incredible model, every detail exact to the original, the gun ports with canon, rigging, and figurehead. Originally outside the entrance to HMS Excellent in 1936, over the years deterioration set in and it is now housed inside and being renovated.

We were then taken on an extended tour and learned more of Whale Island history.

Originally a small island in Portsmouth Harbour, a narrow strip close by Portsea Island; it is now predominantly reclaimed land using deposits dredged from the harbour during the 19th century, increasing the land area by 125%. It was constructed with the help of the many prisoners taken in the Napoleonic Wars.

The island is linked to Portsea Island and thence to the mainland by road bridges.

We were amazed to hear there had been a zoo from 1913 - 1940. Part of the Island was known as the 'Captain's Garden' and it was here that animals, which had come back on Naval ships mainly ended up at the 'Zoo'.

These eventually ended up at Whale Island. hence the zoo.

There was an aviary with rare waterfowl, pheasants, peacocks, and cranes. By 1924, beavers had been presented and Naval ships brought a leopard and bear to the zoo. Eventually there were porcupines, a wallaby enclosure, a monkey house, lions, polar bears, and various other animals. There is a pet cemetery which shows the various types of animals which were kept there.

Unfortunately, in 1939 at the start of the war amid fears that more dangerous animals, including several big cats would escape during the intense bombing of Portsmouth, most animals were relocated throughout the country to more rural locations but others regretfully, shot. 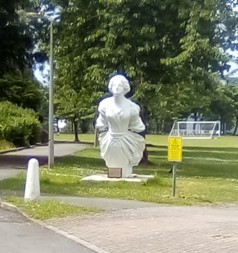 We concluded our tour by seeing the Queen Charlotte figurehead in the grounds, and the Parade ground where the Platinum Jubilee rehearsals were held. As well as its reputation as a gunnery school it is renowned as the Royal Navy's experts in drill and ceremonial.

We all thoroughly enjoyed our visit and to learn so much about this historical Naval establishment, right on our doorstep!