Andy Kendall, who runs 'Owls About Town' with his wife, Zsi, in Selsey brought several of his owls to our November meeting and it proved to be a fascinating afternoon. The owls all looked interested in what was going on and various people were allowed to hold the smaller owls, which caused much excitement.

Andy was invalided out of the army and unfortunately became homeless. He lived alone in a rural setting and began to adopt rescued owls. Often they had been bought as presents for children who were unable to care for them and they were in need of a new home. Andy developed an affinity with them. He met his wife and they started the business, 'Owls About Town'. They attend many venues and events, such as Residential homes, charity events, schools, birthday parties and team building sessions. 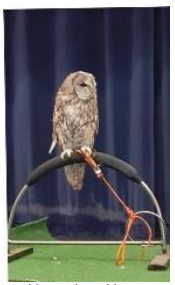 They also run individual experiences and attend fêtes and fairs. Good animal welfare is very important to them - they are all fed on a healthy diet and they travel in purpose built boxes. It is an original way of ensuring that the owls are well cared for while members of the public experience interaction with these wonderful creatures.