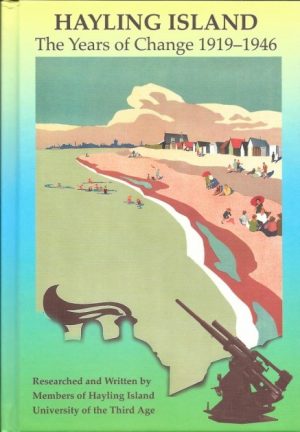 The Ideal Christmas present for all the family and, as a member of Hayling Island U3A, you can take advantage of the special discount price of £6.50. Not convinced? Then see the review by Rear Admiral Colin Cooke-Priest below.

To purchase the book, contact Mike Burnham or Maura Chapman.

On 2nd November a fascinating new history of Hayling Island put together by members and friends of Hayling Island U3A was formally launched at the local branch of the British Legion in the presence of the Mayor of Havant and Mr Alan Mack MP.

Covering the Hayling Island story from the end of the First World War to the end of the second represents an extraordinary achievement. From a purely historical perspective it covers a period which saw the massive social changes which followed the end of the Great War, the roaring twenties, the depression, a period of huge technological expansion not least in aviation, the uneasy period in the run up to another war and then that war itself.

From a more local point of view it starts with a sparsely populated island of open farmland, empty fields and salt marshes hideously infested with mosquitoes. Ferry Road and Sinah Lane have existed for many centuries but even by 1925 there were still very few roads on the Island. For the local historical enthusiast the gradual breakdown of estates for subsequent housing development reflected the increasing social mobility, prosperity and leisure time which in turn led to the fledgling tourism industry; all of which is covered not only in the very detailed text but an almost encyclopaedic collection of fascinating photographs. However, apart from the sheer breadth of detail covered, the book is striking for the fact that so much is told by the stories, reminiscences and reflections gathered from the people actually there at the time. As a result the story comes alive in a way not always achieved in some similar volumes.

Another aspect that will immediately strike the reader of the early part of the emerging story is the haphazard nature and total lack of regulation that was a feature of development in the twenties and thirties. To take just one example, redundant timber railway carriages were highly popular for use as holiday homes. At the same time as the development of Eaststoke and the Sea Front Estate is explained it is easy to forget that planning regulations were not introduced until 1948.

The book is so constructed that it would prove equally valuable to special interest researchers, students with limited time or need to cover the entire period or indeed those perhaps with a limited concentration span.

There are detailed sections on just about anything you can think of - holiday camps, Funland, cinemas, sport, Southdown Bus Services, the Hayling Aerodrome and it’s pleasure flights and demonstrations - I wonder how many are aware that the island once boasted an aerodrome - rationing, churches - you name it it’s covered in extraordinary and eminently readable detail.

And so on to the years of the Second World War and the Island’s contribution. The four holiday camps that became naval establishments HMS Northney 1 - IV, Hayling Island Sailing Club used by Combined Operations to train the Combined Operations Pilotage Parties and the exploits of Count Dracula, one of the famous Little Ships that achieved the miracle of Dunkirk.

There are details of the Islanders’ generosity in the War Savings Scheme, fundraising during warship week, the warship adopted by the Island, HMS Oribi, together with numerous personal stories covering islanders from all three services. There is thought provoking detail of some of the darkest hours, the use of the Island as a decoy to draw the fire from Portsmouth and lastly and perhaps unsurprisingly the longest section, the Islands casualties. The sheer volume of fascinating detail encapsulated in this final section is itself a tribute to the amazing team who have gathered the information and put it all together.

This book is the result of two years research by members and friends of Hayling Island U3A. Of course it could not have got off the ground without the award of a grant from the Heritage Lottery Fund but I hope I have been able to trigger your interest and in doing so, pay tribute to the dedicated group of researchers, writers and collators who have made it all happen. There really is something for everyone and in so doing not only brings an important period of the Islands history very much to life, but has ensured that valuable history has been recorded while some of those who made it are still here to tell the tale.

Mike Burnham and his U3A team have done the Island a splendid service and I warmly commend this fascinating book to you all.

Reproduced with permission from the author.