Bobbie won the 2008 fiction prize at the National Academy of Writing and the New Delta review Creative Nonfiction Prize 2010. She has worked as a barmaid, mushroom picker, film extra, maths coach, cabinet minister's private secretary, care assistant and volunteer adult literacy teacher as well as in social research and government policy. Her talk was lively, interesting and full of inspiring quotes from other authors, such as 'We should be continually jumping off cliffs and developing wings on the way down' - Kurt Vonnegut.

Jane is an actress and historian with 30 years of experience bringing history to life in museums, theatres, heritage sites and u3a meeting venues! Her talks are stand alone theatrical performances using original and replica objects and costumes to illustrate the talks.

At our meeting she appeared dressed as Catherine Dickens and described her happy married life to the great writer and the terrible way it ended. Jane conveyed the injustice of his treatment of his wife and the genuine sadness of Catherine. It was an outstanding performance and very moving. 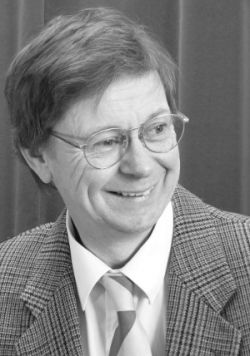 Passports, Assassins, Traitors and Spies was the title of the talk at June's monthly meeting The speaker, Martin Lloyd, had worked for the HM Immigration Service for 24 years. He now appears on television and gives talks on the radio and to groups. He told stories of how three passports have played their influential role in the course of history: an attempted assassination which altered the regulations for issuing passports; the capture of a spy which caused a worldwide modification to the design of the document and for one person the passport itself which turned into a killer. 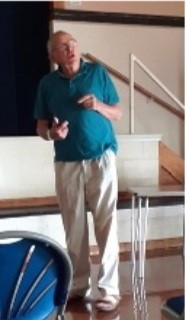 By popular demand, Andrew Negus came back to us for a 4th time to tell us about his travels in the Far East. The talk was as full of anecdotes and humour as ever and included some adventures such as meeting some Komodo dragons but avoiding being eaten by them! In addition he saw the largest Buddhist temple in the world - the Lotus on the Lake, built in 800 AD. He visited the live volcano Mount Bromo and was offered boiled eggs from a volcanic pool. While he was in Java he was warned not to put any valuables in his trouser pockets because thieves would come and slash the trouser leg just below the pocket, remove your wallet and you wouldn't feel anything until you noticed blood trickling down your leg! Andrew Negus found a way round this by putting a row of safety pins below the pocket. He was not robbed!
He returned to the UK via Australia where he camped in the bush and saw the Gloucestershire Lookout Tree, used for spotting forest fires and with strong pieces of wood driven into the trunk so that people could ascend.

He crossed the desert from Perth to Adelaide on the Nullabar train which is the longest straight railway in the world and his wine box was confiscated, much to his annoyance. What a memorable trip!