This is an article published in the Christmas 2018 edition of the Hayling Island U3A newsletter….

This season has witnessed a new approach for the S&T group. Instead of presentations on a broad range of topics, we have experimented with discussions on subjects selected by the members. The first to be considered was the progress and practicality of Electric Cars. With twenty members contributing to the discussion, the main conclusion was that the biggest benefit derived from moving particulates and carbon dioxide emissions away from the streets and over to the power generation units, where they can be contained. Moreover if the power is generated from solar panels or wind turbines then the pollutants are removed completely. Our second discussion was focused on “Driverless Vehicles” where it was thought that it will be many years before such a system can be universally introduced and there was concern that driven vehicles and driverless vehicles would not necessarily be compatible partners on the roads.

On two occasions recently we have joined with the Havant U3A S&T group on visits. Firstly, to the Farnborough Research Centre and secondly, to the Airbus organisation in Portsmouth. The contrast couldn’t have been greater with Farnborough displaying a replica of the Sam Cody’s plane, the first to fly in Britain in 1908 and Airbus showing the construction of the latest satellites. In both locations we were privileged to be shown around by very dedicated and knowledgeable guides and it really brought home the fact that in just over a century, the science of flight has advanced from barely getting off the ground to flying to distant stars. Surely one of the most impressive advances that mankind has achieved in all its history. 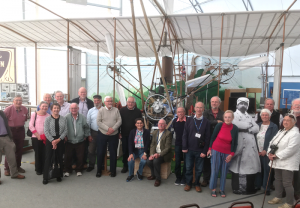 The Hayling and Havant Groups with a cut out of Sam Cody and his replica plane.

The S&T group meets on the 4th Wednesday of each month at St Patrick’s Church Hall and is open to all members of the HIU3A with a small contribution towards the cost of hall hire.