Now a familiar scene for many groups, some members from the Thursday and Friday Ukulele Groups have continued to meet. Throughout last summer we played in the garden to occasional applause from the neighbours (thankfully no vegetables) followed by a brief spell indoors when the ‘Rule of Six’ applied. Throughout the winter we continued using Zoom each week but look forward to meeting and playing live again. As backgrounds show we play in varied locations. We can only imagine what we might sound like live together once again when nobody is muted and timing is everything! 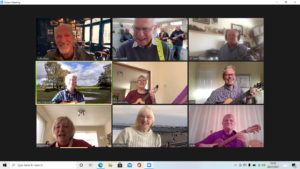 We play a range of songs from as early as the fifties to comparatively recent numbers and are always prepared to experiment with new suggestions. The aim is to have fun and we do have laughter.

Whenever Hayling Island u3a has its open day (currently scheduled for September) we hope to be in action, perhaps with a spare Ukulele or two for someone to give it a try.

Photo with kind permission from members of the group.