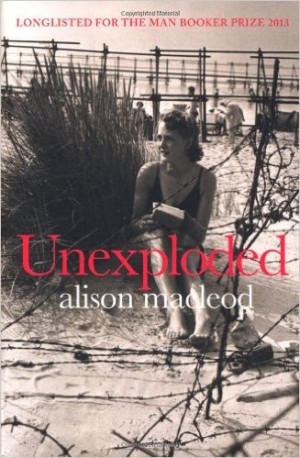 By Alison MacLeod - long listed for the Man Booker prize.

May 1940, Brighton. On Park Crescent, Geoffrey and Evelyn Beaumont and their eight-year-old son, Philip, anxiously await news of the expected enemy landing on their beaches.

It is a year of tension and change. Geoffrey becomes Superintendent of the enemy alien camp at the far reaches of town, while Philip is gripped by the rumour that Hitler will make Brighton's Royal Pavilion his English HQ. As the rumours continue to fly and the days tick on, Evelyn struggles to fall in with the war effort and the constraints of her role in life, and her thoughts become tinged with a mounting, indefinable desperation.

Then she meets Otto Gottlieb, a 'degenerate' German-Jewish painter and prisoner in her husband's internment camp. As Europe crumbles, Evelyn's and Otto's mutual distrust slowly begins to change into something else, which will shatter the structures on which her life, her family and her community rest. Love collides with fear, the power of art with the forces of war, and the lives of Evelyn, Otto and Geoffrey are changed irrevocably.

Review by The Guardian