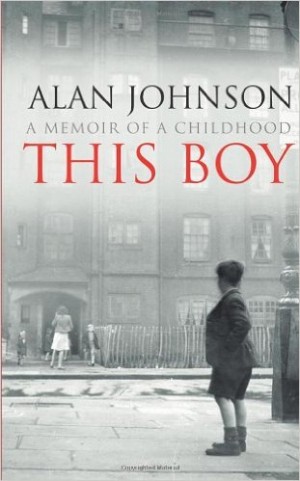 In This Boy, the Kingston upon Hull West and Hessle MP tells of his upbringing in the slums of west London – an area known as Notting Hill now but which, writes Johnson, was known then as "North Kensington, or, to be more accurate, Kensal Town – known to us simply as 'the Town'". He and his sister Linda were brought up by their mother, Lily, in a building with no electricity and a single "decrepit" toilet for all inhabitants. When their father left them for a barmaid, and when, later, their mother died, 16-year-old Linda raised 13-year-old Alan on her own.

… "a tale told with great grace and good humour, of what it was like growing up poor in a single-parent family in postwar Britain. It is at once deeply personal and nationally significant, and a highly engaging read."

In a Guardian review, Chris Mullin judged This Boy "the biography of a politician like no other", saying that "from time to time, one has to pinch oneself to recall that this is not an account of childhood in Victorian England, but of life in the England of the 1950s and 60s." Mullin added: "Far from being a misery memoir, it is beautifully observed, humorous, moving, uplifting; told with a dry, self-deprecating wit and not a trace of self-pity."