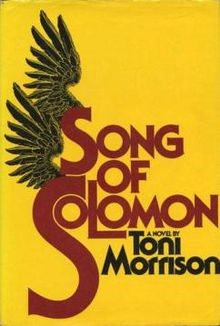 The idea of "fly" and "flight" (as an escape, or challenge) runs through the story of Macon "Milkman" Dead III, who gets his nickname from being breastfed into childhood by his dominant mother.

From the arresting first scene of an insurance agent's suicidal leap, to the closing pages, when Milkman hurls himself into the air against his best friend and nemesis, Guitar, the novel traces Milkman's coming of age as an African American in search of a better understanding of his heritage. To achieve this, in a telling reversal of traditional black migration, Milkman makes his way to the warm and nurturing south from the frozen and alienating north.

The novel is partly set in an unspecified Michigan town, and the unfolding story, replete with buried treasure, violent deaths and slavery tales, moves steadily south to Pennsylvania, where Milkman's grandfather had died, and finally to Shalimar in Virginia, the home of his slave ancestors. In the words of the song that Milkman sings:

Where, in the first and northern half of the novel, Milkman battles his origins, in the south he embraces them, and by the end is at one with his roots.

Published in 1977 Song of Solomon was the first book by a black American woman writer to be chosen as a main selection of the all-powerful Book of the Month Club, and was the book that made her name. In 1993, Toni Morrison became the first African-American woman to win the Nobel prize for literature.