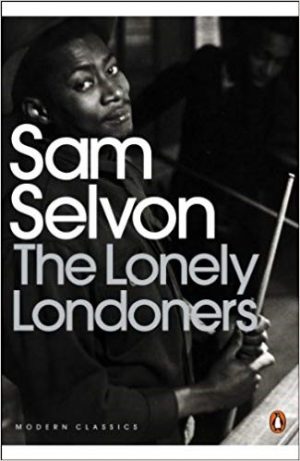 The Lonely Londoners is a 1956 novel by Trinidadian author Samuel Selvon. Its publication was one of the first to focus on poor, working-class blacks following the enactment of the British Nationality Act 1948

The novel is set in 1950s London and concerns the group of Caribbean immigrants known as the "Windrush" generation, who arrived on the SS Windrush in 1948. A lot of them had fought for Britain in the second world war and, having found that they couldn't settle back into their small island communities, decided to seek better opportunities in the "mother country". Welcomed at first by the British as a source of cheap labour, by the late 50s, as their numbers grew, they became a target of racial hatred and xenophobia, and even hasty anti-immigration legislation in parliament.

Because the immigrants lived on society's fringes, not many people knew of their existence, and those who did, such as workplace foremen or employment office clerks, pretended they did not exist.

But this is not only a novel about race and survival; it is also a novel about the city. Selvon's descriptions of post-war London are so powerful and evocative that one fancies oneself alive and present on these same streets. He brings to life the grubby, working-class backstreets of the Harrow Road and Notting Hill, and the seemingly unbreachable divide between them and the rich neighbourhoods of Belgravia, Knightsbridge and Hampstead. He shows how London is not one city, but a compendium of many little cities.

The message of The Lonely Londoners is even more vital today than in 50s Britain: that, although we live in societies increasingly divided along racial, ideological and religious lines, we must remember what we still have in common - our humanity. As the novel says: "Everybody living to dead, no matter what they doing while they living, in the end everybody dead."

A review in the Guardian

Another review in the Guardian