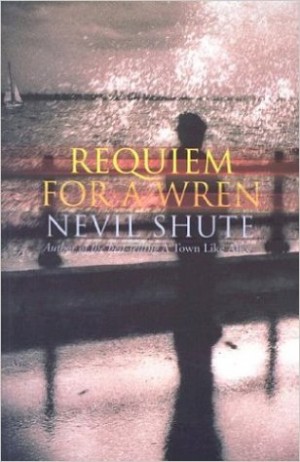 Requiem For A Wren was first published in 1955 by William Heinemann Ltd. It was published in the United States under the title The Breaking Wave.

Alan Duncan is a lawyer, recently called to the bar in England, returning home to his wealthy parents' prosperous sheep station (ranch) in Australia. He studied as a Rhodes Scholar at Oxford University and fought as a pilot in World War II before being injured in action and losing both feet in an air crash. His arrival home is marred by the apparent suicide of his parents' housekeeper, a young Englishwoman called Jessie Proctor.

Alan realises that this troubled woman must have left her personal papers hidden somewhere in the event that her suicide attempt was not successful. He searches the house and happens upon a small suitcase of letters, diaries and the woman's passport. He is appalled to learn that the woman was, in fact, Janet Prentice – a former Royal Navy Wren and the former girlfriend of his dead brother Bill, and someone for whom Alan had spent considerable time searching immediately after the war. Janet had a "lovely war" in Southern England, until the events around D-Day, when she lost Bill, her father and her dog in quick succession. Her mother also dies shortly after the war. She believes herself responsible for the deaths of what may have been allies escaping in a German aeroplane.

Reading through Janet's diaries, Alan learns that she had come to Australia partly because of him but partly because of a terrible event during the war for which she believed she had to atone. Her revelations help Alan think of ways to face his own future.