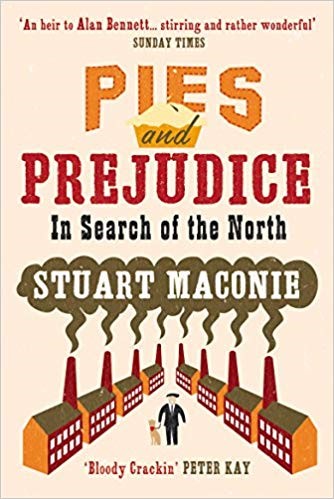 'My name is Stuart Maconie, and I am from the North Of England. Some time ago, I was standing in my kitchen, rustling up a Sunday brunch for some very hungover, very Northern mates who were "down" for the weekend. One of them was helping me out and, recipe book in hand, asked "where are the sun-dried tomatoes?" "They're behind the cappuccino maker," I replied. Silence fell. We slowly met each other's gaze. We did not say anything. We did not need to. Each read the other's unspoken thought: we had become those kinds of people, the kind of people who had sun-dried tomatoes and cappuccino makers, the kind of people who did Sunday brunch. In other words: southerners.'

A northerner in exile, stateless and confused, hearing rumours of Harvey Nichols in Leeds and Maseratis in Wilmslow, Stuart goes in search of The North. Delving into his own past, it is a riotously funny journey in search of where the clichés end and the truth begins. He travels from Wigan Pier to Blackpool Tower, the Bigg Market in Newcastle to the daffodil-laden Lake District in search of his own Northern Soul, encountering along the way an exotic cast of Scousers, Scallies, pie-eating Woolly-backs, topless Geordies, mad-for-it Mancs, Yorkshire nationalists and brothers in southern exile.