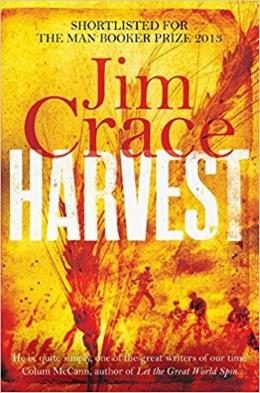 Harvest is set in an unnamed English village, as wholesome as the title suggests. Feudal and medieval, it is on the cusp of great change: subsistence agriculture giving way to the production of wool.

The inhabitants, however, are unaware of history's march. They are more concerned with three strangers - two men and an attractive woman - who have set up camp on the edge of the communal ground, lighting a fire that gives off a thick black plume: "They know the custom and the law. This first smoke has given them the right to stay. We'll see." When a second plume of smoke comes from the manor house, the dovecote burned to the ground and stables on fire, the outsiders are blamed. Tried by Master Kent of the manor, their heads are shaved and the men put in pillory, a device related to the stocks. At moments, the terms Crace describes it in are more reminiscent of a crucifixion.

Having settled in the village only 12 years earlier, narrator Walter Thirsk, Kent's man, is also a relative newcomer. With his hand injured from saving the manor house, he is unable to work the fields and is set to work with another newcomer. Mr Quill is a chart maker, who counts the villagers and quantifies the land: "We know enough to understand that in the greater world flour, meat and cheese are not divided into shares and portions for the larder, as they are here, but only weighed and sized for selling." What price a way of life, asks Crace. Not much, seems to be the answer: the arrival of the new lord of the manor, Edmund Jordan, heralds a brutal new age.