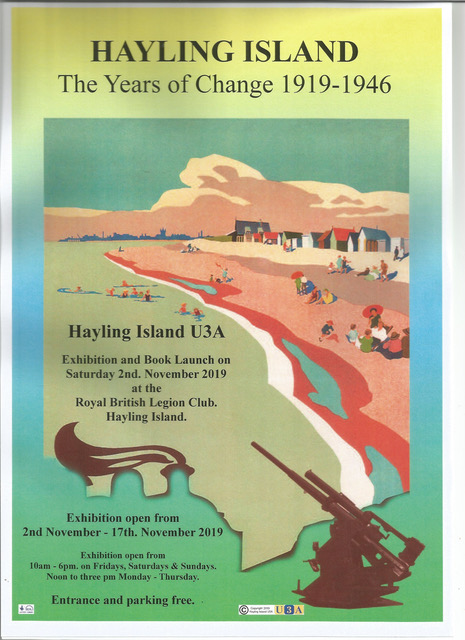 From the visitors' book...

“A fantastic exhibition, so wide ranging, everyone involved should be proud”

“What a wonderful, moving exhibition: congratulations the collection is remarkable”

“Thank you for an inspiring exhibition. Two proud Hayling Islanders”

“An amazing collection! Well done to all”

“A most amazing and enlightening view of our Island”

(Derek was chairman at the time)

Widely informative, without being overpowering, a set of six of display posters formed a "Timeline", setting out the salient events in each of the War years, formed the information bedrock of the Exhibition.

Each poster set out, in an attractive and highly readable format, that year’s main world political events; military events on the British front; world events as a consequence of conflict and, quite unusually for exhibitions of this kind, events in the world of the arts. In addition, photographs and information about the life and times of Hayling Island gave an understanding of the impact of the War on local people.

At one end of the room was a poignant list of the casualties, with a few illustrated and fascinating biographies; and, happily, a much longer list of those who served and who returned. Although the impact on them in the aftermath of war, in terms of physical and mental damage, cannot be measured and, with but few exceptions, will never now be known. Indeed one visitor told me that following WWI service one of her grandfathers “self-medicated with alcohol” and that the family was ashamed of him until they realised the mental and physical suffering he had endured.

The “School of Musketry”, “The VAD Hospital”, “The Contribution of Hayling Women”, “Food Production on the Island” and Hayling Schooling” all featured on the information boards as did a display of WWI postcards and a feature on Medals. That all was not always well at home, and suspicion and paranoia reigned at times, was reflected in a letter to the Parish Magazine from an aggrieved couple asserting that, contrary to public opinion, they were not and never had been agents of the German Empire threatening action for libel against the rumour-mongers.

A questionnaire about items in the Exhibition was widely utilised and enjoyed by the children; a table of WWI balaclavas, socks, gloves and mittens fascinated them and some of the civilian artefacts on the table of items from the home caused mystification: especially the do-it-yourself cobblers last that many thought was an anchor; and the flat irons that several thought might have been heated in the microwave oven!

Paintings, photos, artefacts, posters and displays were all brought together in an extraordinarily effective presentation of Hayling at War. The inclusion of an amazing set of WWI artefacts was due to the extraordinary generosity of Peter Everard, who has been an ardent collector for many years.

The rather lovely, delicate, 1909 Edwardian wedding dress for Sarah, obviously a petite and pretty lady on the day of her wedding with Hayling baker Frederick Peacock, sadly to lose his life, but weeks before the end of the War leaving her with three young children to bring up, contrasted with the brutal formality of the military uniforms: formal Official letters contrasted with poignant notes to home: and menacing, deadly weapons of war contrasted with the crucifix fashioned from a bullet case and bullets with an exquisitely carved miniature of the Christ figure found in the mud at Passchendaele. Was it British, French, German? But representing a common humanity and hope in the depths of the muddy man-made Hell.

War in its sheer brutality in battle with the equal burden of shortages of food and fuel, and endless hard work endured by those left at home, largely the ladies and the children, was displayed with cool clarity: but with the amelioration of the triumph of the human spirit above the callous carnage shining through.

This was an exhibition demonstrating research of professional standards allied to design and presentation skills of the highest quality. It was an exhibition where respect and admiration for all the Hayling Islanders involved in the War, home and abroad was shown in abundance. 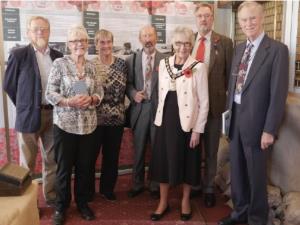 The exhibition was without triumphalism. It was affectionate, respectful and commemorative of our Island’s forebears.

With contributions from many groups within our U3A, the team of Thelma Cook, Karen Walker, Bryan Bowen and Peter Hill initially led by Derek Drew and then by Paul Chapman when Derek moved off the Island, produced an Exhibition at least the equal, if not better than those set up by professional curators in public museums and galleries. It was the outcome of devoted commitment, sheer hard work and the application of admirable skills honed over many years. The picture on the right shows the exhibition team with the Lord Mayor of Havant.

The Exhibition was a triumph and I am certain that every member of the U3A will join me in offering the team our unbounded congratulations.

The Exhibition Organising Team would like to acknowledge the tremendous assistance provided by the members of the Hayling Island U3A who volunteered to undertake steward duties. The exhibition was open for a total of 90 hours and at all times there were at least two stewards on duty. Their presence allowed the public and the school children to gain more benefit from their visit, facilitated the sale of many books and ensured that all the exhibits remained in situ! In general, the stewards found that the duty period was not a chore but instead a fascinating interchange with the many members of the public who wished to discuss their own family involvement in WWI and witnessing the minds of children attempting to comprehend the full implications of the exhibition.

At the 'Life and times' exhibition we displayed posters describing:

We reproduce those posters below... 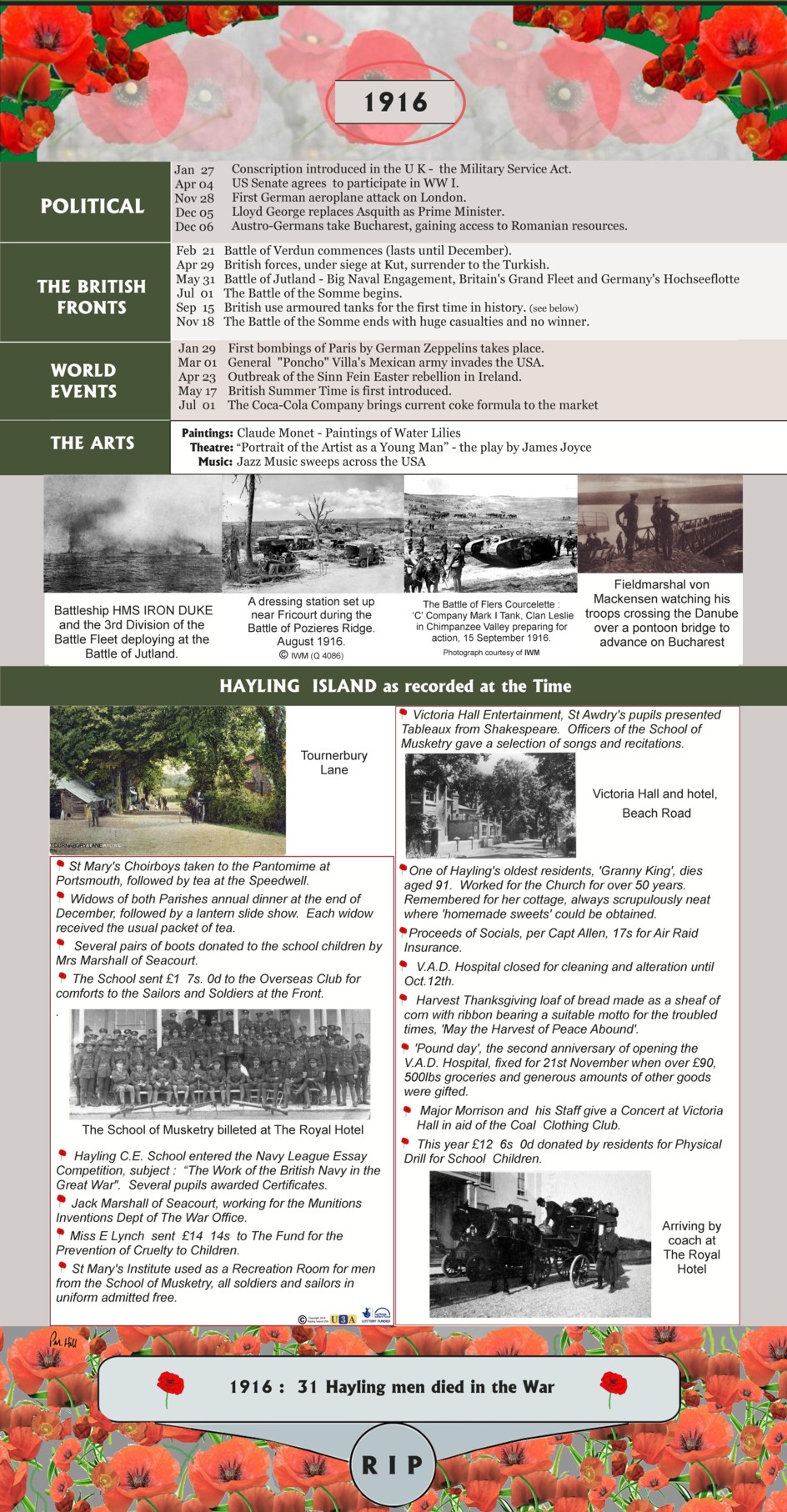 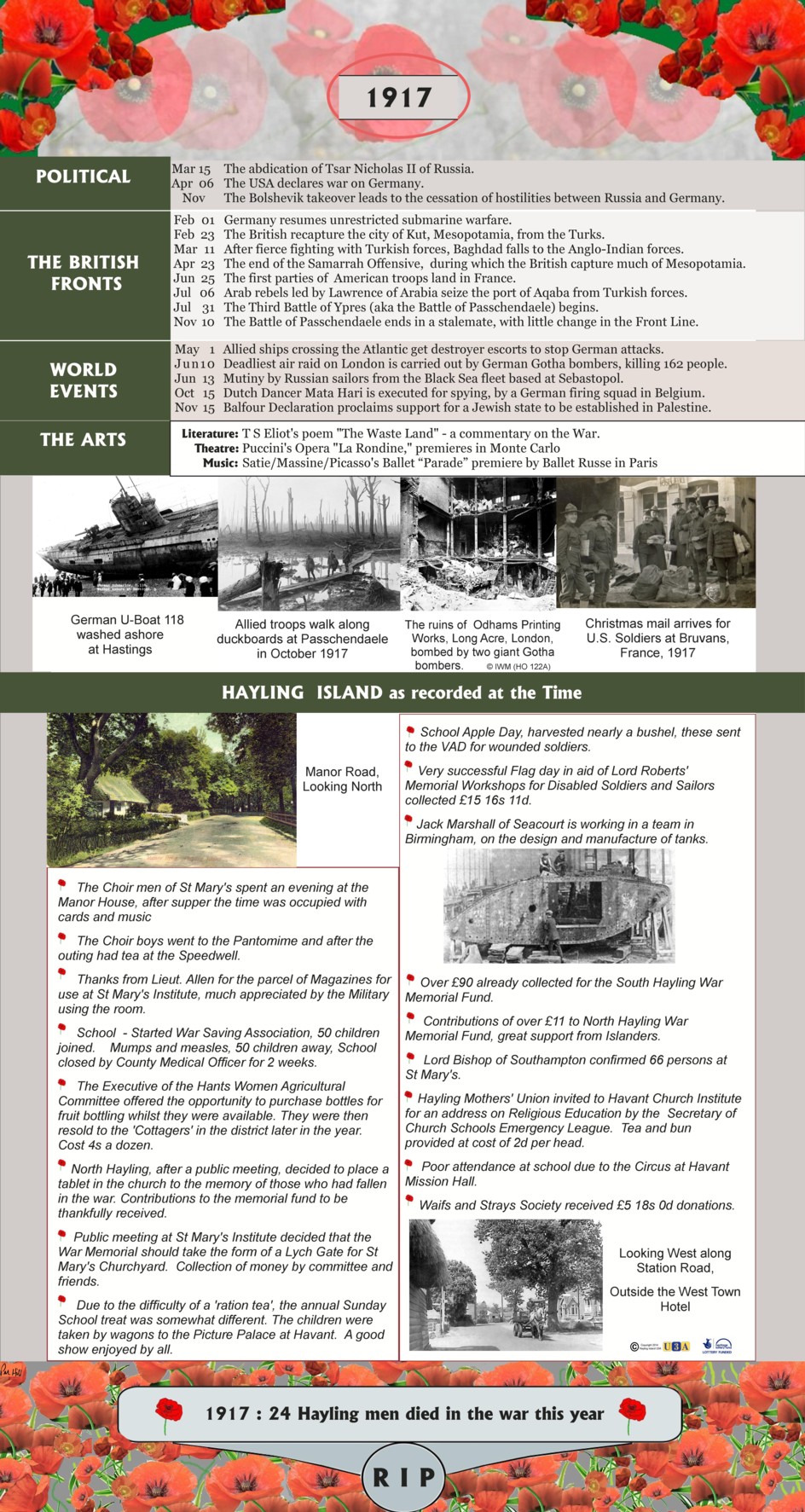 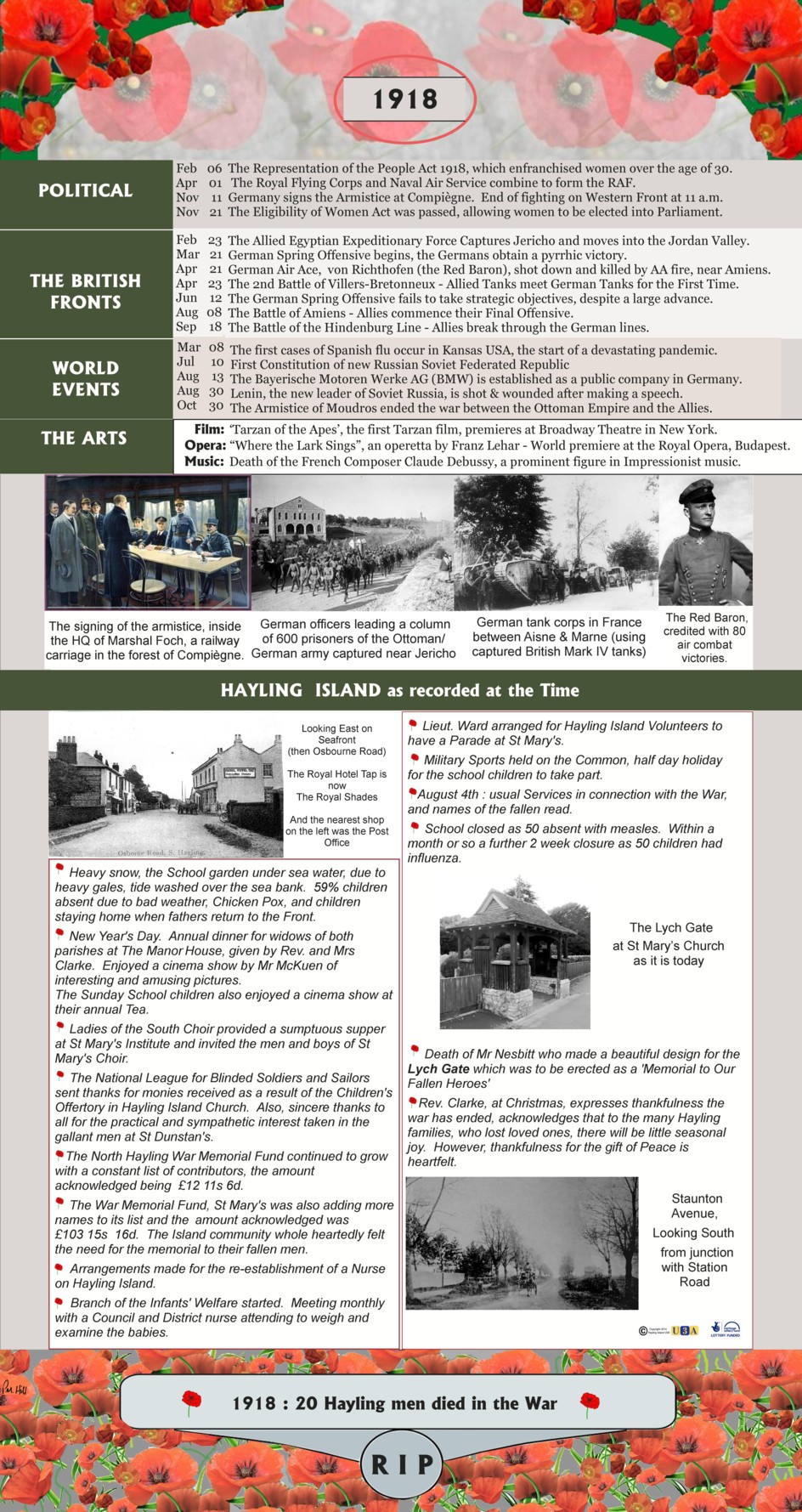 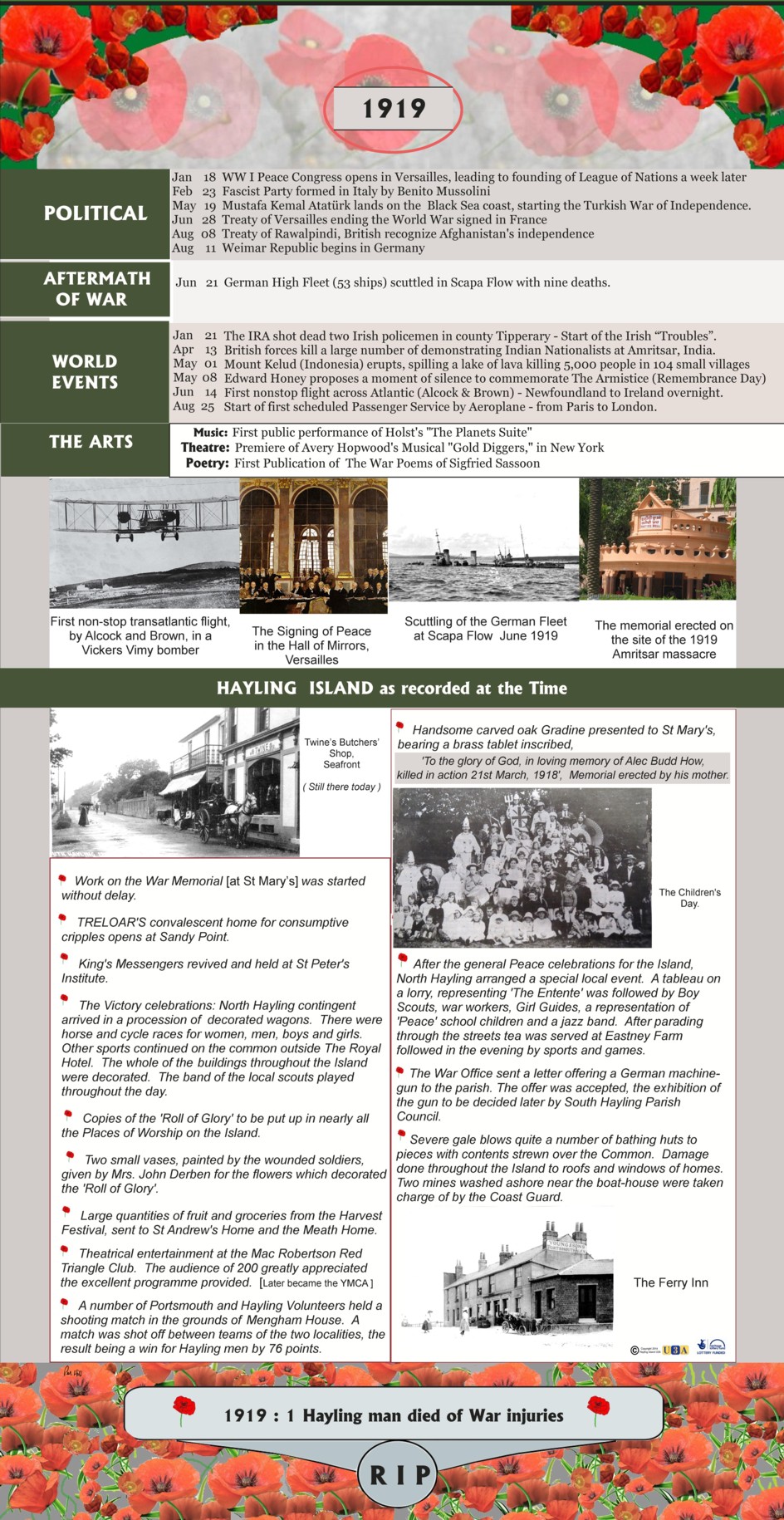 Hayling Islanders during the war 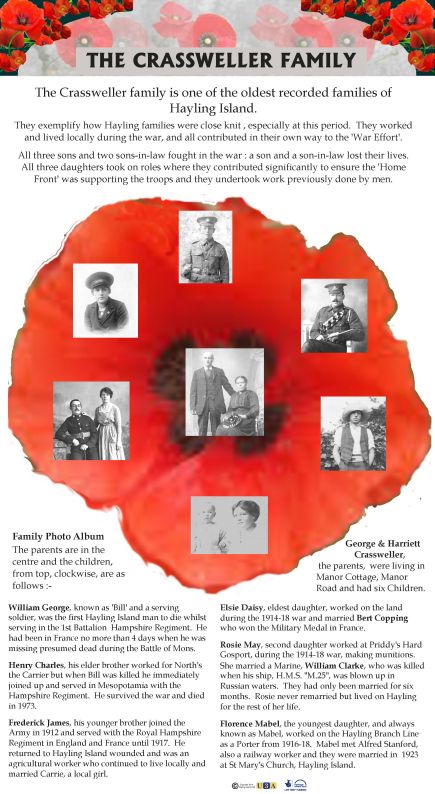 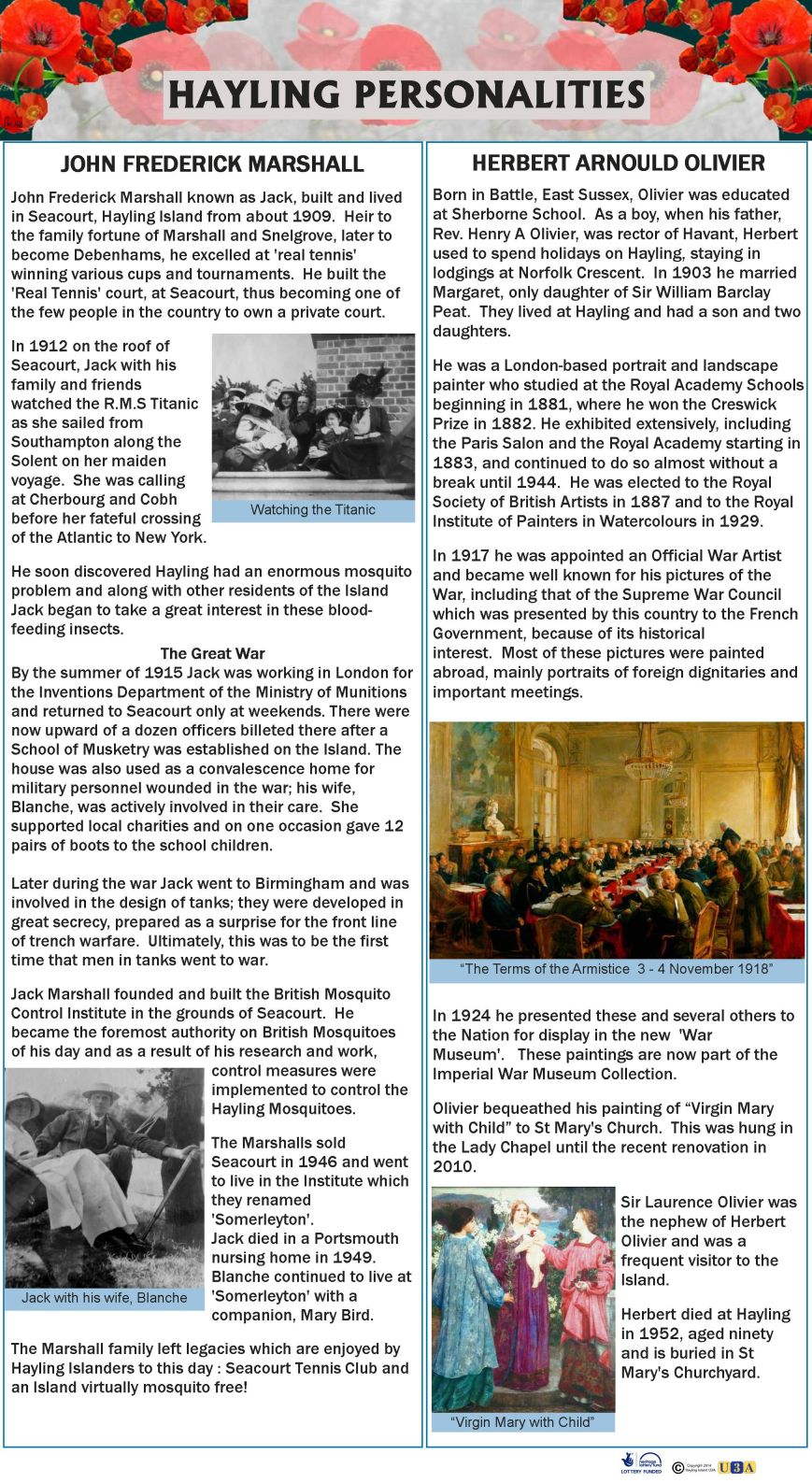 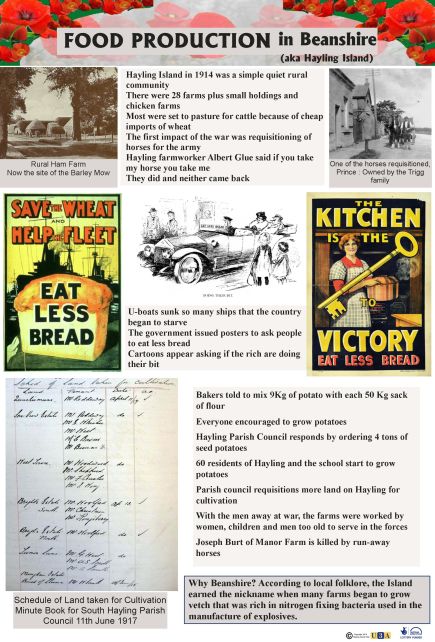 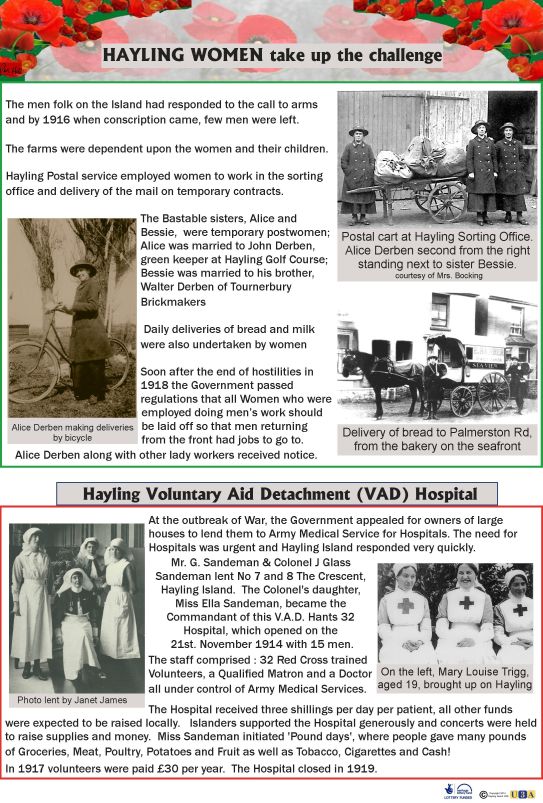 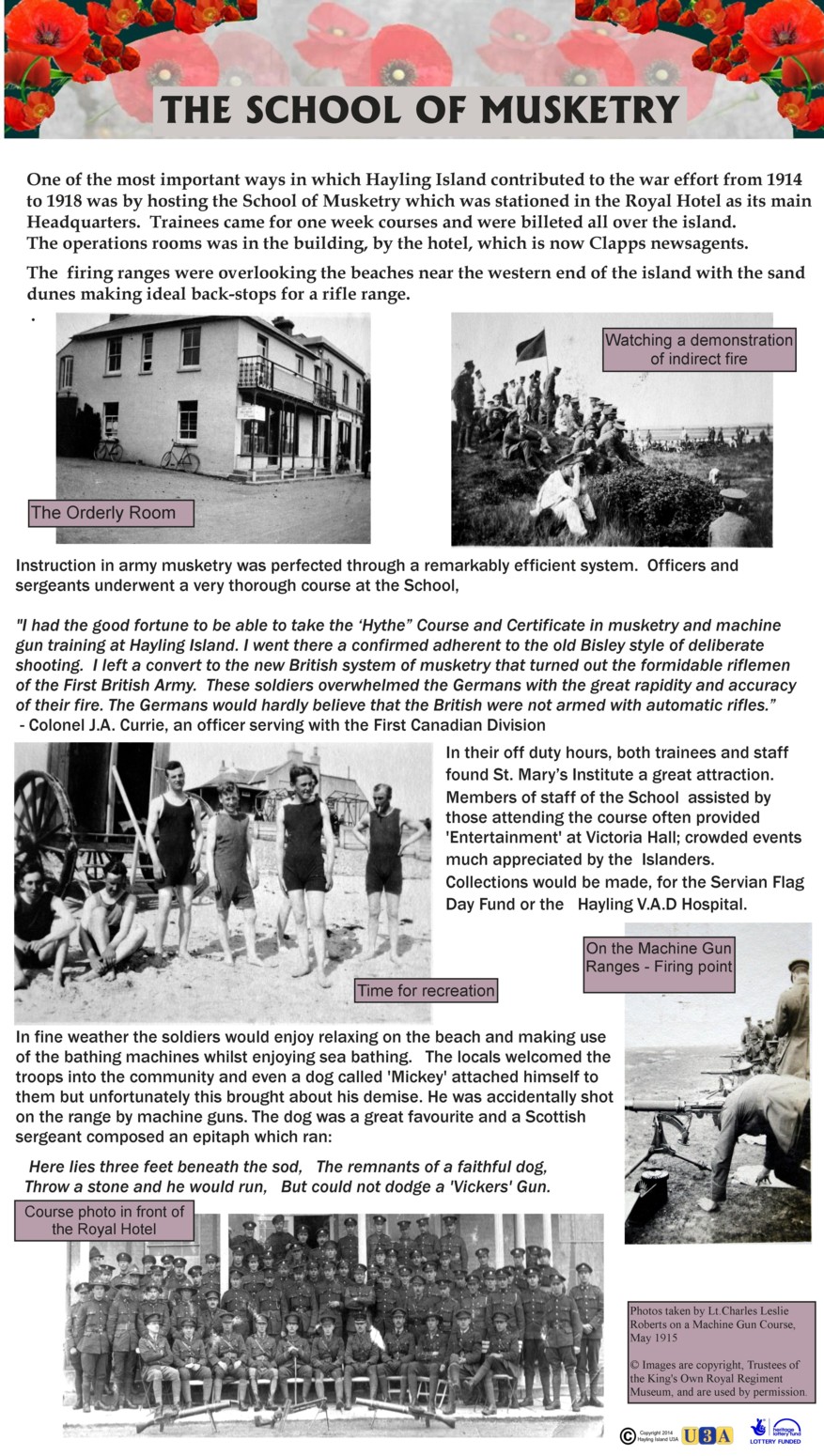 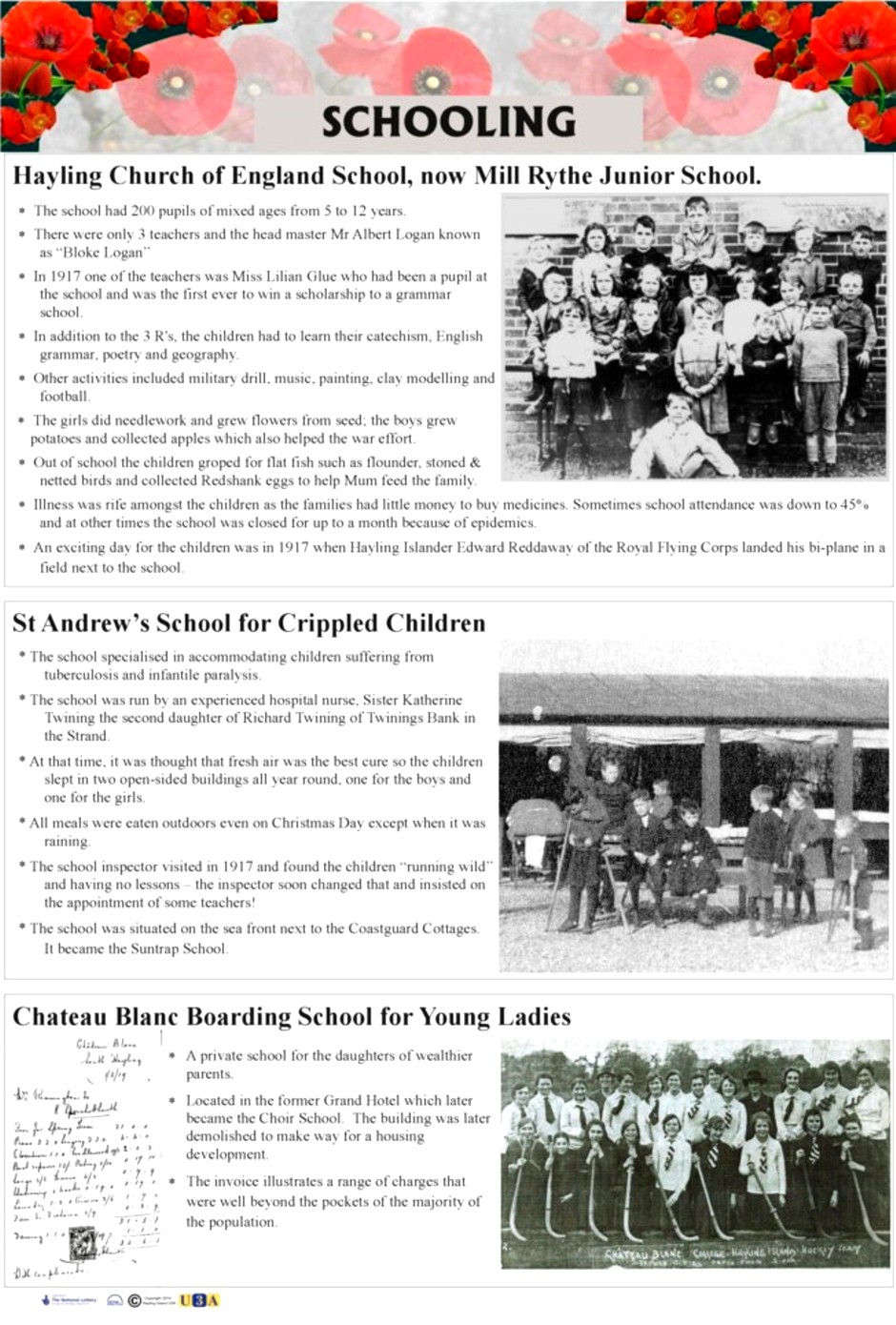 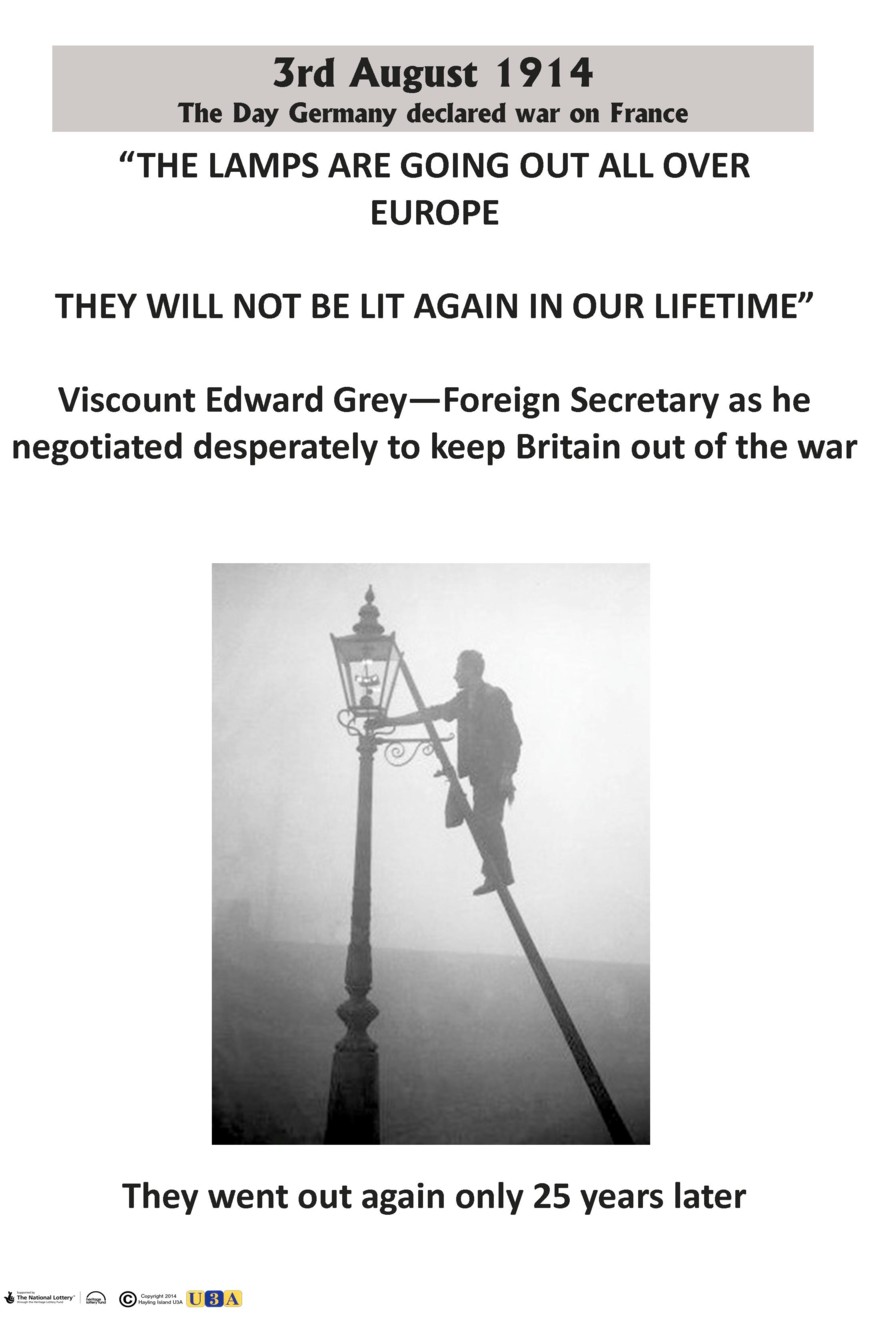 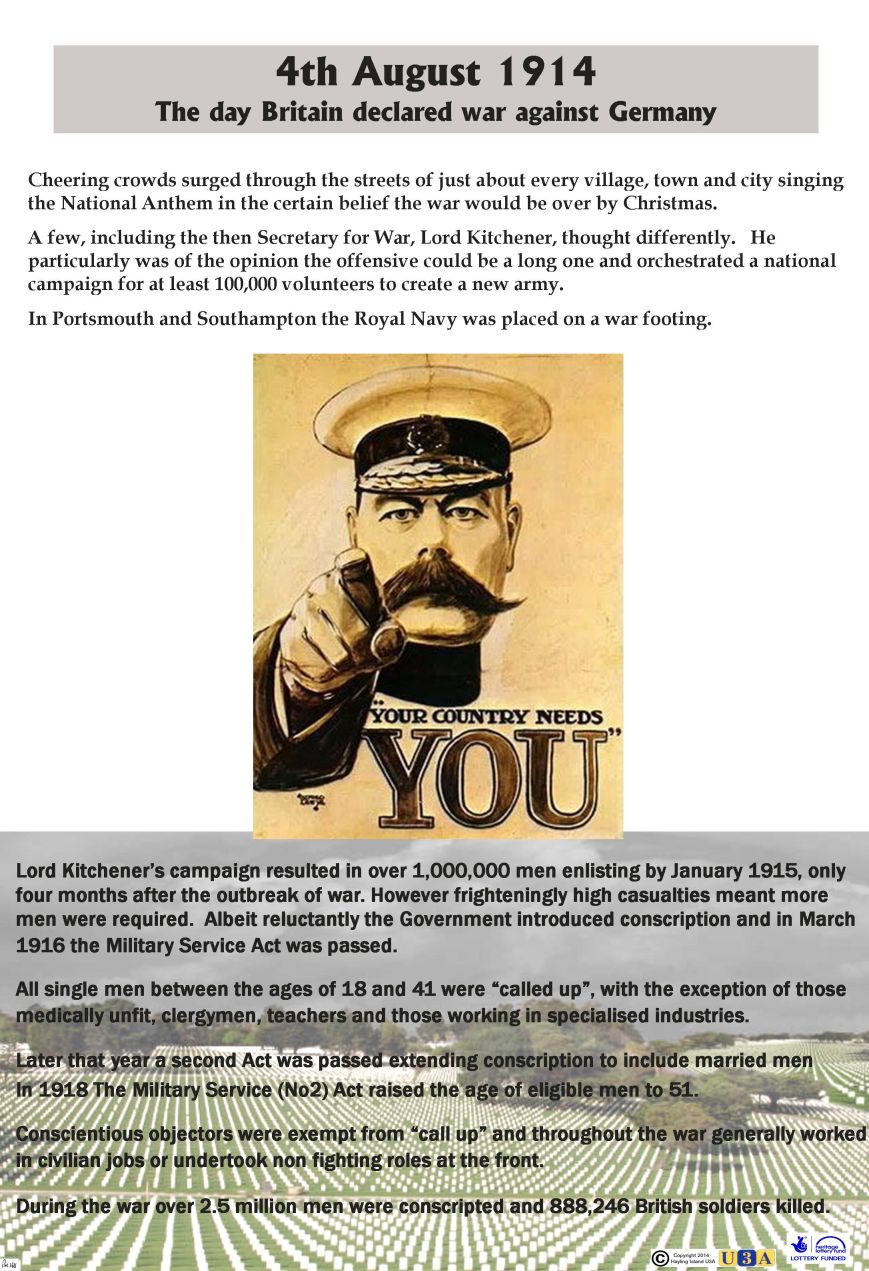