We have had another good year in terms of fun playing together but have all been saddened and shocked by the unexpected death of our leader Avril Keyes in September. Avril was a brilliant and versatile musician who brought a breadth of knowledge and range of skills to our group and in wider groups across Hampshire. She leaves a big gap behind her.

Our group are meeting in late November to decide on a way forward and how to cope with the loss of our lead player. We will report on developments and decisions through the website.

This is an article published in the Winter 2017 edition of the Hayling Island U3A newsletter... 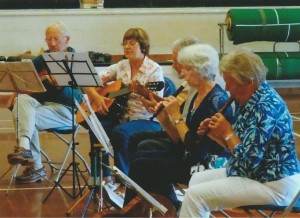 This group continues to meet 2 weekly in a friendly, relaxed atmosphere.

We play various styles of music and songs on a variety of instruments. We tend to play mostly Celtic folk tunes but also some songs, some jazz and have been adding popular classical pieces to our repertoire.

In the summer we were asked to play for a special charity raising event by the Hayling Bowls Group at the community centre. As it was wet, the indoor mats were put out and we were all invited to join in. For some of us it was our first try at bowls.

We also had a display of 'in house' Morris men dancing and then were invited to join in with some folk dancing. Much fun and laughter was had! We played a 20 minute spot with music and songs. As Sue Humphrey had arranged for song sheets to be distributed the audience was able to join in with us...which they did with gusto. The afternoon included a wonderful BBQ bravely manned outside under shelters, in the rain!

We have recently welcomed a new player to the group and he has settled in well.