This is part 2 of a history of Winchester presented by Andrew Negus. 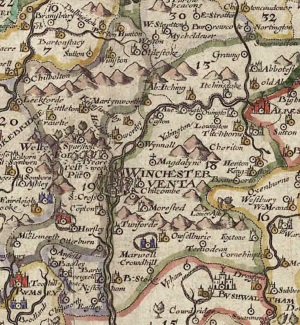 We will see how Winchester went from being the noble Capital of England to a provincial backwater and how its population was reduced from 8000 to 4000. Its royal heritage will bring destructive visits from Simon de Montfort and Oliver Cromwell. Black rats will cause one of the great schools of England to be founded in Winchester. The cathedral will get a makeover by Bishop William Wickham. Bishop Henry Beaufort will add greatly to the splendid St. Cross and King Charles II will build a rival to Versailles on the site of Winchester’s slighted castle.

The Reformation will see Winchester’s monasteries swept away , its Bishops lose their political power, one of their number gaoled, and one forced to flee to safety in Holland. Another will build a new palace for himself and a canal for the city.

Queen Mary Tudor and King Philip of Spain will dodge London and marry in Winchester, Nell Gwynne visits and causes embarrassment to the clergy and Judge Jefferies will see that the legal revenge killing of an old woman is carried out for his king.

Andrew is a retired history teacher, an around the world backpacker (twice), a Blue Badge guide for central southern England, and he aspires to be a local historian. He also keeps chickens, bees and daughters.