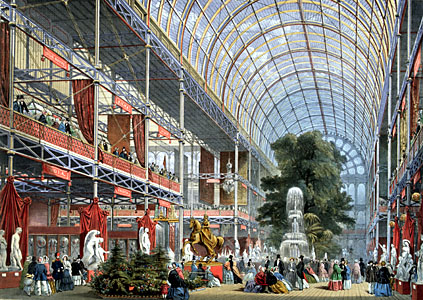 Originally designed for the Great Exhibition of 1851, then transported to Sydenham and rebuilt and enlarged, the Crystal Palace was Joseph Paxton's masterpiece, and was the largest iron and glass building ever constructed. It dominated the south London skyline for over 80 years until its tragic destruction by fire in 1936. This is its story.

Ian Gledhill has had a very varied career, from designing underground railways as an engineer for London Transport, to appearing in pantomime with Julian Clary. In between he has worked in travel and tourism, music publishing, television, and especially the theatre, where he has been a director, set designer and opera translator. His main interests include architecture, history, transport and classical music, especially opera and operetta, and these are reflected in his wide ranging list of subjects for his lectures. These days when not giving talks or appearing in panto he can often be found driving trains on Volk’s Railway along Brighton seafront, or trams at the National Tramway Museum in Derbyshire.

After we have heard about the Crystal Palace, we will hold a brief Extraordinary General Meeting to hear a proposal to change the start of our financial year from September 1st to April 1st. This is to bring the HIU3A into line with the Third Age Trust.

If the proposal is adopted, there will be a reduced membership fee payable for the period September 1st 2018 until March 31st 2019. Then in April 2019, a normal membership fee will become due for the following 12 months.

If you are unable to attend the meeting, you may cast your vote by proxy by notifying the Membership Secretary: Membership@haylingu3a.org.

The Annual General Meeting will continue to be held in September of each year.