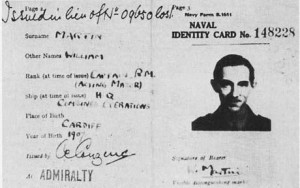 Throughout 2014, hundreds of commemorations took place throughout the world to honour all those that lost their lives in war since 1914. However, there is one grave, on its own in a Spanish cemetery which is largely forgotten but marks a death that turned the fortunes of the allies in the last war.

Strangely, the person honoured did not give his life but his death for his country.

He was quite simply, ‘The man who never was’.

Following Operation ‘Torch’ in 1942, the allies had secured all of North Africa and hundreds of thousands of troops based between Alexandra and Algeria, the next ‘big’ question was how to invade Europe, from the South, when and where?

The ideal ‘push’ would be through Italy with Sicily as the bridgehead, but this island was highly reinforced with German divisions and airstrips.

Later that year, a very risky deception was proposed by MI5 and Naval Intelligence, coded named “Operation Mincemeat”. The aim was to deceive the German High Command into believing that the invasion would be through Sardinia and Greece.

A top secret team was set up to discuss and eventually they arrived at a decision how to deceive the enemy, using a wartime death.

However, it is not so easy to just obtain a body, relatives have ‘rights’ and records need to be established, even in wartime, the law must be obeyed and questions are asked. So it was that in January 1943, ‘the ideal’ body arrived into a South London mortuary and it was decided to use this body and to create a new identification for it, in other words, build a life that had never happened, family, friends and relationships. Time was very tight and the pressure was on.

The deception had to be undertaken by May 1943 and the impact had to be Spain, a neutral country but with strong sympathies towards the Axis powers of Germany and Italy. But what kind of deception and how?

Richard Swaine will tell us more.