We have cancelled this meeting. 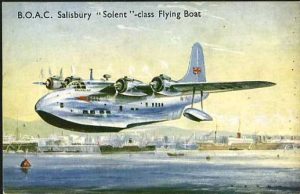 Flying Boats are now extinct as a form of passenger transport, but for 20 years in the mid-20th century they were the ultimate mix of speed and luxury. Based in Southampton and carrying only a few dozen passengers, they offered ocean liner standards of comfort and cuisine at 200mph.

How long did it take to get to Australia? What was the in-flight entertainment? And why were flying boats in danger of crashing when the onboard cocktail bar opened?

Stephen Hoadley joined the staff of the National Railway Museum in 1995, then went on to work at the Museum of Science in Manchester and Hampshire County Council Museums Service. He now splits his time between working at the Crown Court Southampton and delivering a range of talks. He was made a Fellow of the Royal Society of Arts in 2016.