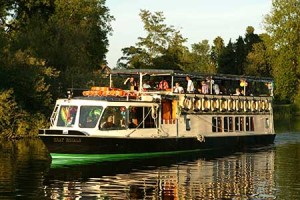 The boat leaves from the Runnymede Boathouse at 11:00 for a cruise through Old Windsor Lock, past the Village of Datchet and through the grounds of Windsor Castle. The boat turns at Romney Lock for the journey back to Runnymede.

A relaxing cruise which includes an individually served light lunch. Perfect for those groups who need to save as much time as possible for visiting other local attractions in the afternoon. The level landing stages and easy access to the boat makes this an ideal trip for those people with disabilities.

While you take in the beautiful scenery of the Royal River Thames, we will serve you with a Traditional Ploughmans lunch. English Cheddar cheese, slice of finest ham, coleslaw, green salad with tomatoes, pickles and chutneys, roll and butter. All followed by a slice of cake and a cup of tea or coffee.

On disembarking you can visit the Tea Rooms at the gateway to Runnymede designed by the great architect, Sir Edwin Lutyens. If you have some energy left you can go for a stroll to view the memorials. 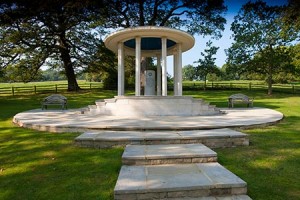 Inscribed "To commemorate Magna Carta, symbol of Freedom Under Law". Unveiled on 18th July 1957 and created by the American Bar Association. 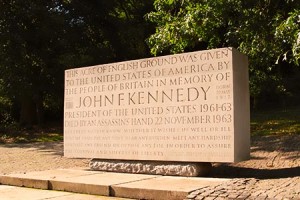 British memorial for U.S. President John F Kennedy was jointly dedicated in May 1965, by Queen Elizabeth II and Jacqueline Kennedy. 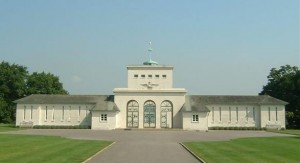 The Air Forces Memorial at Runnymede

This memorial commemorates by name over 20,000 airmen who were lost in the Second World War during operations from bases in the United Kingdom and North and Western Europe, and who have no known graves. They served in Bomber, Fighter, Coastal, Transport, Flying Training and Maintenance Commands, and came from all parts of the Commonwealth. Some were from countries in continental Europe which had been overrun but whose airmen continued to fight in the ranks of the Royal Air Force.

The memorial was designed by Sir Edward Maufe with sculpture by Vernon Hill. The engraved glass and painted ceilings were designed by John Hutton and the poem engraved on the gallery window was written by Paul H Scott. The Memorial was unveiled by The Queen on 17th October 1953.

Cost of the visit is £34
There are 53 places available.
Number awaiting payment: 5, confirmed bookings: 50, waiting list entries: 9.
We are no longer accepting bookings for this event.