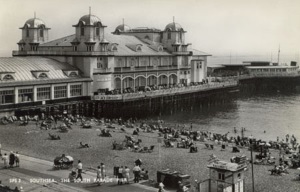 A lighthearted look at seaside entertainment in Sussex over the years, from Bathing Machines to End of the Pier Shows and "What the Butler Saw", including a brief history of the seaside itself.

Ian Gledhill has had a very varied career, from designing underground railways as an engineer for London Transport, to appearing in pantomime with Julian Clary. In between he has worked in travel and tourism, music publishing, television, and especially the theatre, where he has been a director, set designer and opera translator. His main interests include architecture, history, transport and classical music, especially opera and operetta, and these are reflected in his wide ranging list of subjects for his lectures. These days when not giving talks or appearing in panto he can often be found driving trains on Volk's Railway along Brighton seafront, or trams at the National Tramway Museum in Derbyshire.